“Relevance – Rethinking the role of Conservation Communication,” was the title of Andrew McKean’s keynote address to the annual meeting of the Association of Conservation Information in Savannah, Ga., on July 8, 2019.
McKean, a veteran outdoor writer, editor and sportsman is currently the director of Powderhook, described as a “digital community that connects beginning hunters and anglers with experienced mentors.” For the purpose here, the title of his PowerPoint presentation is changed to, “An Agency Approach to Managing Communications in Your Agency,” to, hopefully, capsulize some of the ways of thinking and practical steps conservation communicators can take to maintain and even enhance relevancy. Or as McKean wrote, “How to get your mojo back and save your agency.” 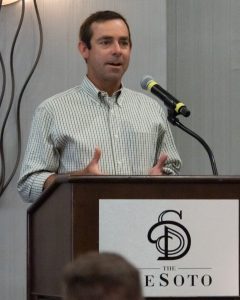 Andrew McKean was the keynote speaker at the 2019 ACI Conference.

No doubt, anyone who has worked in conservation communications for any length of time has struggled with the notion of relevancy. This in the face of what McKean believes are multiple shifting priorities, chronically under-resourced staff, and workplans that devolve into meeting unplanned events and requirements. Conservation agency relevancy has passed an inflection point, according to McKean, due to declining outdoor sports participation, leading to declines in revenues, which have upset traditional hierarchies. Other symptoms, he describes as hopeless and cynical, include: stiff and entrenched institutional resistance, agency leadership that fails to support the needed funding and resources to do the job, a distrust of modern-day communications tools and technologies, and lack of permission to fail on the way to success.

McKean posits that conservation agency communications/education/outreach units function similarly to IT units, meaning that we’re inwardly facing, responsive (reactive) to needs of other external or internal divisions and are often only thought of when you need us. He outlined a list of sample duties, that most in the audience have or are doing as part of their regular responsibilities. And, in keeping with his and my title for this article, he suggested that government conservation agencies look at the private sector paradigm of becoming “An Agency,” meaning a full-service, client-based, and both an inward- and outward-focused advertising agency.

The skills required of this internal “agency,” McKean said are, “deep knowledge of issues and background, persuasive communication techniques, effective content packaging and delivery, personal and professional contacts with key influencers, and the ability to measure effectiveness of efforts,” (metrics, etc.). He also implores professional communicators to look at their roles as public trustees not only for advocating for public resources but perpetuating the idea of citizen conservation.

He explained, “A new way of thinking of sustainability is your client is not the agency, but rather the resources the agency manages well into the future.” This takes a willing public, he said. McKean used the example of magazines as a communication or outreach medium and showed several great examples. His encouragement to “tell meaningful, accessible stories…can open windows and bridges to agency,” is not only applicable to magazines but across the entire spectrum of platforms modern communicators now utilize.

Making the transition to an “agency-style” communications shop, McKean argues, is a hard but necessary transition. He says the time is right, there are many partners ready to assist and technology can amplify our messages. He added that as traditional conservation constituents are declining in numbers, non-traditional constituents are increasing in numbers and they have little idea of or preconceived expectations of your organization.

The power of a good example, McKean noted, lies right beneath many of our noses, if we have education and outreach divisions. Educators have a slightly different mindset than communicators in that they’re programmed for outreach and routinely engage non-traditional audiences. They, in many instances, have mastered curricula with adaptive scientific and outcome-based tools. Agency educators routinely promote ideas central to overall agency success, such as environmental literacy, an appreciation for place-based and experiential learning and resource stewardship.

Communicators can learn the following lessons from our education colleagues in an effort to embrace and create a path forward for change:

McKean suggested some tactics to employ. Finding and encouraging both internal and external allies and alliances. Recruit and retain talent with digital skills and experience. Find and promote early successes, and use analytics to explain and defend the work of intentional communication.

Fortunately, many of us and many of our agencies are already on the path of utilizing an agency approach to managing communications. We’ve taken the difficult steps and fought for outcomes. In Hawaii we’ve seen numerous examples where an agency communications approach has led to needed public or internal policy change. Where a sharp focus on storytelling across a multitude of platforms and attention to deliverables and metrics has resulted in at least what we believe is a better, more positive public perception of our work and of the resources we manage.

This all leads to “relevance,” McKean concluded. Success will mean more engagement from both traditional and non-traditional audiences, broader public understanding of agency roles and purposes demonstrated in policy actions, and acceptance of peers and partners by collaborative agencies. He also says communicators will enjoy greater traction, higher standing within their agency, increased revenues, broader partnerships and happier colleagues. Relevancy is about becoming a broader and more sustainable agency.