This Nebraska country girl embarked on a momentous adventure to attend the Association of Conservation Information conference for my first time in historic Savannah. As I stepped off the airplane into the sweltering Georgia humidity (got to say – not a fan), the aroma of the marine environment sparked some memory cells that hadn’t been accessed since I was a young girl. 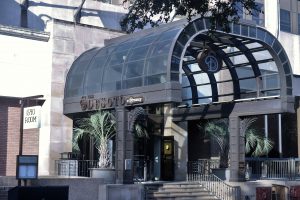 The DeSoto, site of the 2019 ACI Conference

From the point of check-in at the majestic DeSoto Hotel, the Southern hospitality struck a Midwesterner like me as quaint and pleasant. I knew there would be two fellow Nebraska colleagues traveling to the conference as well, so once we got settled in, we decided to get out and explore this fabulous city. We headed to a small bar where I ate my first “gator balls,” which is by no means what one probably thinks, but they were absolutely phenomenal. We finished our meal and walked back through the mossy oak-tree-lined streets of Savannah to the hotel.

The ACI Board of Directors generously granted me a scholarship to attend the conference, and that first evening, the scholarship recipients were asked to choose a topic that we could inform those who were unable to attend about one of the many sessions. I chose “Better Relationships with Conservation Partners.” I could tell you about the session, which was amazing. It included several heads of various agencies all expressing how important it is to communicate and consider them while driving home the importance of communication among all those with whom you exchange information, whether it’s local newspapers, TV reporters or a partnering agency.

For my article, however, I’d like to focus a little more on the actual relationship-building the conference advocated and empowered. I found that the most important relationships weren’t built during the sessions. They were formed as we mingled with like-minded individuals who shared our frustrations and passions.

I had a short conversation with a lady about our struggle at my office with gathering more email addresses to send out an electronic copy of our quarterly newsletter in place of the paper copy, thus potentially saving my agency thousands of dollars. In my ramblings, she suggested I contact a colleague of her state agency who had recently done that exact task. By the end of the next session, I not only had met with this man, we had an entire conversation about the steps their agency took to switch from paper to digital and how wildly successful that transition had been for them. This simple 10-minute conversation with him could potentially save my agency tens of thousands of dollars.

Some of Elizabeth Kierl’s many new colleagues.

At another point during the conference, a lady stood and introduced herself as a Nebraskan. I don’t think it’s far-fetched to say that my jaw probably hit the floor. I had no idea that there were more attendees from Nebraska! She then asked for all of us to raise our hands. Now I didn’t get an exact count, but I do not feel outlandish to claim that there were probably 10 of us there! Did we know each other prior to the conference? Some probably, but most not.

Once we realized that other people in our line of work were attending the same conference, the doors started swinging open! We now know each other’s names, exchanged business cards, spent time chatting about various issues we were experiencing at a state-local level, and were able to formulate plans of attack on various issues as they arose. So, to me, those were the “better relationships formed with conservation partners” that I didn’t even know existed until the conference.

I found the conference, the sessions and the relationships developed to be priceless, and I am sure that the tips and tricks learned will provide real, practical solutions for my everyday challenges. I want to thank the ACI Board and my board of directors for giving me a chance to broaden my horizons and expand my network with those who share similar trials and tribulations!