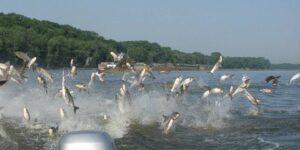 You’ve probably seen Asian carp in video clips, leaping out of the water – often into boats. They are an invasive species, introduced in the ‘70s to control algal blooms in wastewater treatment plants and aquaculture ponds – only to explode population-wise, crowding out native fish and damaging habitat, according to the USGS. They are found in most every state. But in this case, we’re focusing on their presence in Illinois.

The state has spent millions trying to control the takeover. The fish’s culinary potential is one avenue officials are pursuing, but “Asian carp” just does not hold much appeal to diners.

“We’re trying to make the name more attractive, so people will be more inclined to purchase them and have them for table fare, have them for dinner,” John Rogner, assistant director of the Illinois Department of Natural Resources told Chicago’s WTTW.

Plans had called for the new name to be announced June 29. According to Illinois DNR, however, that announcement has been delayed to a date yet to be determined.