or How we managed to celebrate 3 decades on TV and get story ideas for almost free
By Don Cash, Texas Parks & Wildlife Department

The “Texas Parks & Wildlife” television series has been on the air longer than some of you reading this have been alive. Sure, you’re young, and the show is not old – it’s experienced. Actually by some broadcast standards, our show is old. How many television programs survive 30 years? Even on PBS? Not many. When I moved from TV news to my first producing gig on a nature program, “Mississippi Outdoors,” I was amazed at how many state wildlife agencies did this kind of show. Twenty-five years later I’m amazed at how few agencies do this kind of show. 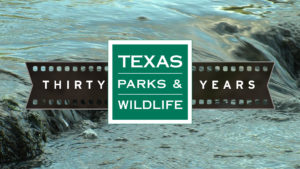 “Texas Parks & Wildlife” first aired in 1985 as “Made in Texas.” It was a half-hour program that focused on one topic each week, basically created to raise the public awareness of the agency. KLRU, the PBS affiliate in Austin, was the first station to broadcast the show. It wasn’t long before you could see it on every PBS station in the state. A few years after that, the name of the show changed and it became more of a magazine-style program with four or five different segments each week. Thirty-one years later, it’s still on the air.

So when the program was about to turn 30, we decided that we needed to do something special. And by “we,” I mean the marketing folks. I’m never one to create more work if I don’t have to. But you know how marketing folks are: once they get an idea, they run with it. Janis Johnson, in our marketing department, was the real driver behind the efforts. We probably got a little tired of all the work it took, but I am grateful to her for occasionally jabbing us producers with a cattle prod. I mean, come on, I’m busy producing a weekly show. I don’t have time to do marketing and planning and promotion. But Janis wouldn’t take “no” for an answer, and a successful campaign was created.

The whole 30th season carried the “Taking Texans Outside for 30 Years!” theme. We integrated a retro film strip with “Thirty Years” into the show’s logo. We rebroadcast the very first episode from the very first show. We let current and past producers introduce, on camera, their favorite segments. We did a short story on the history of the series, from the perspective of our newest producer, who is actually younger than the show. We promoted the anniversary in new releases, emails and social media. We even got the creative services and IT folks to update and expand the TV Web pages. But the biggest and most time-consuming thing we did was to create a contest.

The idea was to engage current viewers, reach new viewers and generate story ideas. We didn’t want people to just enter, we wanted them to get involved, to let us know what they’d like to see on the show. The main part of the online entry was “My 200-word idea for a TPW television story.” Fill that in, answer a few questions about your viewing habits, give us some contact info, hit “enter,” and you might win some prizes. The prizes were pretty good too: a GoPro camera, hotel stays, gift cards, a Yeti cooler, a TPW magazine subscription, and a Texas State Park pass. But my favorite part of the contest was this: the winners get their story idea produced for the television show, and they also got the choice of being in the story or being on the production crew. So not only could you win some cool stuff but you’d get to be a part of the show.

We didn’t get just one story idea for the show. There were almost 1,000 entries, more than we expected. It was a bit of a grind to go through all the entries as they came in, and then getting the rest of the producers to read and review added another layer of time and effort. But we got a lot of ideas we hadn’t thought about before. After 30 years you kind of feel like everything has been done before, so it was a pleasant surprise to get some new ideas.

The winning story entry was from a family in Austin. Their idea was “Snorkel Texas.” Christian Erickson wrote “There are wonderful places in the TPW system to snorkel, freshwater and saltwater parks. It’s a family activity almost any age can enjoy, low cost of entry.” It was a story that we had never done, it’s accessible to a lot of people, and fit the goals of the agency. We had a winner. So this spring, we’ll take the Ericksons to a few state parks around the state, tell their story and make them stars. 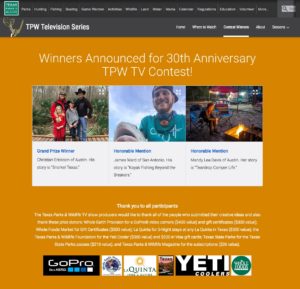 TPWD created this Web page announcing the winners of its contest.

We’re always trying to find out how to bring new people into the outdoors: to get them hunting, or fishing or camping or snorkeling. We want people to watch our show. If they watch the show, they’ll learn about the important work of our agency, and maybe they’ll decide to go do something out in nature. One of the questions on the entry was “If you don’t watch the show is there a reason why?” The most common answer was “I didn’t know there was a show but I’ll watch it now.” So hopefully we did get some new viewers. New viewers translates into new conservationists. And that is driver behind all this. Who knows, maybe we’ll have enough new viewers to still have a television show in another 30 years.