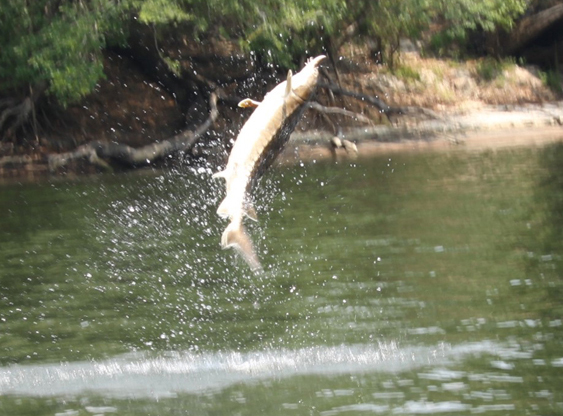 Gulf Sturgeon have been the cause of dozens of boating injuries in Florida, as well as one tragic death.

In 2015, Florida experienced our first sturgeon-collision fatality, when a 5-year-old girl died after a sturgeon struck her and her family near Fanning Springs. Her mother and brother were also injured. In addition to this tragedy, six other people were injured by jumping sturgeon in 2015.

The Florida Fish and Wildlife Conservation Commission has conducted an intense public awareness campaign since 2006 to let boaters know that Gulf sturgeon were present in the Suwannee and can jump from the water when spooked, which can cause some serious collisions.

In April 2006, a woman was seriously injured by a jumping sturgeon when it hit her in the face, requiring her to endure multiple facial reconstruction operations. Throughout the summer, eight more people reported injuries from sturgeon encounters. Because of these encounters, we initiated a public awareness campaign to let boaters know this risk exists.

In summer 2007, another nine people were injured in seven strikes. Apparently the public awareness campaign was working, but we still had doubters. One of the first folks injured this year was asked if she had seen the warnings about the sturgeon and knew about the risks. Her answer was, “Yes. We saw the signs. We just didn’t think it would happen to us.” This has proven to be a reoccurring theme with those injured.

There was intense media attention generated around the sturgeon and those injured. On July 4, 2007, the sturgeon issue made the front page of the New York Times. The story also ran on Nightline, ABC World News, CNN and state television stations, in addition to appearing in local, state, national and international newspapers. I even got a call from an Australian radio station, wanting an interview for their morning show.

Each year, the media coverage is centered on the initial release about the sturgeon returning the river and any strikes that are reported. Media attention is intense every time someone gets hurt. 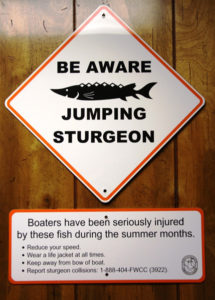 Updated signs have been created and placed at boat launches to grab boater’s attentions before heading out.

The FWC continues its intense public awareness campaign to let people know these fish are present and can injure boaters enjoying the Suwannee. The agency message is “Go slow. Wear your life jacket. Stay off the bow of the boat.” Traveling at a slower speed may give boaters more time to react to the leaping fish and receive less of an impact if they are struck.

A news release is sent out each spring when the fish migrate into the Suwannee from the Gulf of Mexico to spawn. News releases also have been generated after each reported strike to reinforce our message.

In 2006, signs asking boaters to be aware of the jumping sturgeon were posted at all Suwannee River boat ramps. However, these signs are frequently stolen. Each year before the sturgeon return, law enforcement officers visit each boat ramp and replace any missing signs. In 2011, new signs warning of the dangers of jumping sturgeon replaced the old metal signs installed in 2006. These signs are similar to “deer crossing” sign with less text than the original. We also worked with our Boating and Waterways staff to create a sign that was posted along the river, facing the water, warning of the jumping sturgeon. These are posted to our flood zone signs. 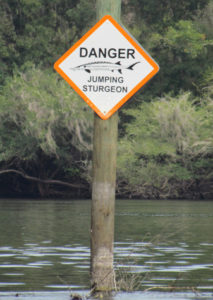 In addition to press releases, videos and web pages, signs are placed right on the water to warn people about the dangers of leaping sturgeon during summer.

A Living with Sturgeon website has been created to provide more information about the sturgeon. This is a great place to check out if you’re interested in learning more about this fish and its biology.

FWC Social Media has also created videos for Memorial Day, Independence Day and Labor Day to alert and remind boaters that the fish are using the river the same time we humans like to use the river. 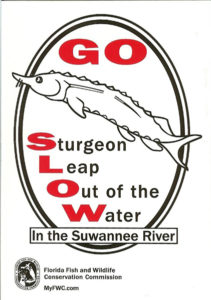 We are updating our “Living with Sturgeon” brochure with the goal of having new information ready for the 2016 season. Researchers now have a better idea of why the fish jump, the first question I get asked by both the public and media.

The tragedy of last year’s fatality has put the sturgeon back into the spotlight. For 10 years, the FWC has handled the sturgeon issue with minimal assistance from other agencies. Now, we are working much closer with the U.S. Fish and Wildlife Service, U.S. Geological Survey and other federal agencies to improve the public awareness campaign and sharpen boater awareness of the risks these jumping fish can pose.

One interesting addition will be images from side-scanning sonar from USFWS showing the concentration of sturgeon resting in the deep portions of the river. If people can actually see how many sturgeon are in the areas where they’re boating, they may take our advice a bit more seriously. We don’t want to scare people off the river – it’s a gorgeous place and should be enjoyed – but it’s important that people know the risks.

Even one injury is too many as far as the FWC is concerned. That’s why we’re working to make sure everyone who enjoys the Suwannee River is aware of the risks from these fascinating, prehistoric creatures.