State fish and wildlife agencies in recent years have come to realize and embrace the importance of marketing. The objectives can vary, ranging from building public support, to promoting participation in outdoor activities, to selling products and services.

The Arizona Game and Fish Department historically had engaged in smaller-scale efforts focused mainly on public information, such as hunt-draw cycles, aquatic invasive species awareness, and boating safety, to name just a few. In 2014-15, we took a big step and worked with an outside marketing agency to conduct a statewide awareness campaign explaining how we use Wildlife Restoration dollars to benefit wildlife. The campaign resulted in a 20-percent lift in recognition of the department and its mission. 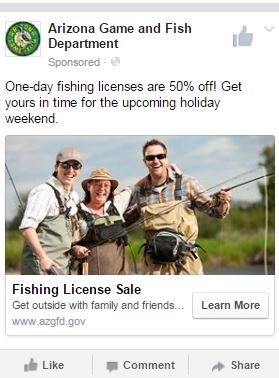 But the department had never tried a marketing campaign geared toward discounted pricing on hunting and fishing licenses. We didn’t even have the authority to offer discounts until 2013, when legislation passed giving the Arizona Game and Fish Commission and Department the ability to set license and tag fees without having to get legislative approval each time.

Getting the legislation passed took a huge, agency-wide public-involvement effort, with more than 80 meetings with constituency groups, the general public and legislators to build support. After some negotiations that added checks and balances on this authority, the bill became law.

Its passage resulted in several successful outcomes. We were able to simplify the license structure from more than 40 licenses and tags down to six licenses and a state migratory bird stamp. We gained the ability to be entrepreneurial and offer new products and services, such as PointGuard and I Support Wildlife. And, we were given the authority to periodically offer license discounts.

The process for offering discounts needed to be looked at strategically. Which license products should we try discounting? When is the best time to conduct a campaign, and for how long? How do we reach potential new audiences? Above all, how do we ensure that the discount promotion will result in an increase in sales and revenue and not just a reallocation of when current customers buy?

We looked at conducting three different license discount campaigns in the summer of 2016. The department’s existing communication vehicles (e-news, social media) and traditional media relations were used to reach our traditional customers. We also had a $5,000 budget to work with an outside agency on digital marketing geared toward people who were outdoors enthusiasts but not necessarily hunters or anglers.

Two of the promotions, one over the Memorial Day weekend and one over the 4th of July holiday, offered a 50-percent discount on Short-Term (single day) hunt/fish combo licenses bought online. The Short-Term license was chosen because it had the best “impulse buy” potential and was the least likely to affect traditional buying cycles. 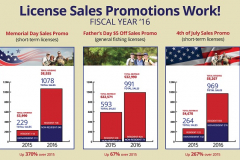 The third promotion was for $5 off a general fishing license bought online over the Father’s Day weekend. This time period was determined to be more favorable for motivating new general fishing license sales as opposed to simply moving the time our existing customers buy their licenses. The campaign showed a sales increase of 398 licenses (593 in 2015 to 991 in the same time period in 2016) and a revenue increase of $10,419.

We’ve subsequently conducted several other campaigns. In fall 2016 we conducted a one-month promotion offering a $5 discount off “I Support Wildlife” memberships (regular price is $25). We sold more memberships (about 1,000) during the campaign than we had the entire prior year. In 2017, we conducted fishing license discount campaigns for the Cinco de Mayo holiday and the Thanksgiving holiday, and also did an upsell campaign (no discount) promoting the benefits of buying combo hunt/fish licenses as opposed to just a hunting or fishing license. All of these resulted in a lift in license sales and revenue.

While these campaigns have been modest successes involving small dollar amounts, they’ve shown promise. We plan to offer more of them in the coming months and years.