What is more fascinating than bats – the small flying mammals that help farmers manage pesky bugs? Go batty over our stories of the nighttime critters and the work being done to save numerous bat species. From research studies to citizen science, we cover it all in an engaging story map where you can find stories from across the country. 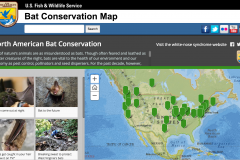 Since its discovery, white-nose syndrome (WNS) has spread rapidly throughout the eastern U.S. and Canada and is now found in 31 states and five provinces. It has killed more than six million bats, with mortality rates exceeding 90 percent for many sites and species. It has been confirmed in nine species, two of which are listed under the federal Endangered Species Act as endangered and another as threatened.

With many bat species on the decline, biologists race to save species and learn more about preventing the spread. Many stories on this map share the great work being done to provide new bat habitat for bats and control WNS. Spreading the word and educating about WNS allows us share their crucial role in managing agricultural pests and encourage others to do what they can to protect bats in their area.

If your state has a cool bat story, please send a published link and high-resolution image to catherine_hibbard@fws.gov or david_eisenhauer@fws.gov.