South Carolina has experienced a huge shift in demographics in the last few years. The Hispanic population in South Carolina rose 192 percent from 2000 to 2010. Survey results showed that most Hispanic residents were unfamiliar with the South Carolina Department of Natural Resources, yet they enjoyed fishing.

The SCDNR created a Hispanic outreach coordinator position and hired Alix Pedraza to tackle the task of creating a new program that would specifically target the Hispanic audience in South Carolina. The goals of the program were to increase Hispanic participation in SCDNR programs, facilitate communication between the Hispanic population and SCDNR staff and provide more SCDNR services in Spanish.

Accomplishing these goals was no small order. Pedraza translated many publications and online documents to Spanish. In fact, an entire Spanish version of the SCDNR website was created. The website included information on licensing, boating, fishing, hunting, regulations, events and education. Website users valued the re-packaged Spanish information. In March 2016 more than 12,000 users viewed the Spanish version of the SCDNR site. 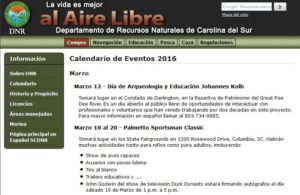 Other translated items include license forms, fishing forms, fish identification charts, stickers and coloring books. In the coloring book and license sleeves, the SCDNR focused on the message that agency staff does more than enforce laws. The SCDNR included text that explained that the agency also hires biologists to study wildlife and that license dollars support conservation.

The SCDNR used media as an outreach tool. Specialized Spanish Facebook and YouTube accounts were created. Pedraza and staff authored news releases for Hispanic newspapers, created digital advertisements and had a presence on the radio. In addition, they partnered with several national and international organizations to promote the outreach program, gain credibility and reach more of the target audience.

Another way that Pedraza, volunteers and staff reached the Hispanic audience was through events. The SCDNR handed out Spanish publications at Hispanic and international festivals. Pedraza and staff also hosted some behind-the-scenes events. Members of the Mexican Consulate group visited a fish hatchery and a wildlife management area to learn more about the conservation efforts of SCDNR.

Pedraza advised that before starting a Hispanic Outreach program, it is important to take the time to research cultural nuances. In South Carolina, 70 percent of the Spanish speakers are from Mexico. This percentage varies by state. In her experience, the Hispanic parents in South Carolina are hesitant to send children away to camp by themselves. Therefore, the SCDNR provided camp scholarships in pairs for siblings. Pedraza also learned that the Hispanic population in South Carolina is more trusting of a program if they form a relationship with the program leader. Finally, Pedraza said that individuals often prefer to communicate in their native language, even if they are bilingual. Due to the possible communication barrier, they also prefer to be contacted via phone versus through email.

The program has been successful at reaching the growing Hispanic audience. Yet, Pedraza and staff have plans to make it even better. They are working with law enforcement to see if it would be possible to grant leniency to those who purchased the wrong license due to a language barrier. They will also continue to translate more SCDNR publications and promote the program. Most importantly, they will continue to survey event participants so that they can learn how they can reach out to the South Carolina Hispanic audience even more effectively.