The Oklahoma Department of Wildlife Conservation was one of several states selected in 2020 to receive a $50,000 R3 Marketing Grant through ACI.

With R3 efforts highly prioritized in its new agency strategic plan, along with a guiding belief that retaining and reactivating customers is key to continued recruitment of new hunters, the ODWC’s execution of the grant helped address recruitment, retention and reactivation at key points along the customer journey. Also important, the grant allowed the ODWC to continue and evolve ad strategies that were at risk of having to be suspended because of budget cuts that were impacting the agency at the time. 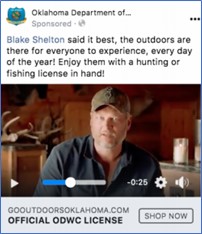 As shown in the accompanying breakdown, the agency partnered with its license vendor Brandt Information Services on very successful paid search, display and social ads. Additionally, email and blogging efforts that were tied to text messaging funded by the grant accounted for over $17,000 in revenue.

While the content from these efforts can be reused over time and replicated by other states, more importantly the concepts of using influencers, landing pages and updated communication tactics can be adapted for any campaign in the future. In fact, the ODWC received a second grant for 2021 to replicate campaign success, which will be reported on in early 2022.