As the 2019 ACI conference waned into its final afternoon, attendees were rewarded with a session sure to benefit even the most seasoned spokesperson. 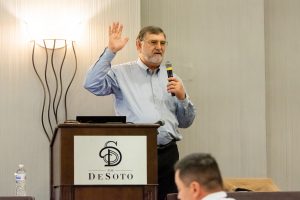 Doc Kokol provided valuable guidance on communicating with the media during a crisis.
(Photo by Taylor Main, SCDNR)

Kokol broke down risks into several categories, but focused on what he called the “High Hazard, High Outrage” category. He cited an example in Zanesville, Ohio where a man who possessed large numbers of lions, tigers and bears turned them loose then killed himself. In this type of situation, Kokol suggested to avoid over-reassuring the public and to provide actions they can do, like remaining indoors, bringing the pets inside and staying tuned for updates.

He also pointed out several obstacles to communicating during high-risk situations, such as uncertainty, complexity and incompleteness of information. Kokol advised an agency to not get so tight-lipped that they won’t say anything until they know all the facts, but to speak first and tell the news; you will update them when information becomes available.

Another great point of advice Kokol shared is to express empathy early in an interview. People want to know you care, before they want to hear what you know.

For example, if you are giving an interview regarding a tragic event involving a child, start out with something like, “I have (or had) children this age and can only imagine what the family is going through.” Kokol said you have about 30 seconds to win the public over, but once you’ve said it, move on.

Remaining open and honest during an interview is also key. For example, don’t hold information back to “avoid panic,” because uncertainty is more difficult to deal with than knowing a bad thing. When asked a question you don’t know the answer to, say you don’t know or you can’t answer and give the reason, then bridge to what you do know and can say about the issue. Don’t forget to indicate that you will follow up with answers before their deadline.

Kokol said that interviews are opportunities to deliver your story and are not intellectual exercises, debates, arguments, educational exchanges or friendly chats. Your job is to give the reporter your story and to go into the interview with your own agenda. Commit your messages to memory and return to them consistently.

Doc Kokol left the audience with an important tool available to a risk communicator called the “message map,” developed by Dr. Vince Covello. The basic premise is to keep individual key messages brief, ideally less than three seconds or fewer than nine words for each key message, and less than nine seconds and 27 words for the entire set of three key messages. He challenged the attendees to develop message maps for key issues within our agencies to be better prepared to handle crisis situations.