Video is an engaging medium our agencies can use to showcase native wildlife and the activities that take place to manage wildlife resources. It can also show how our agencies provide opportunities and access to the public. In fact, as state agencies go, we should consider ourselves fortunate that our work is visually appealing and informative. We get to use video as an engaging, effective tool to showcase efforts put forth working towards our respective missions. 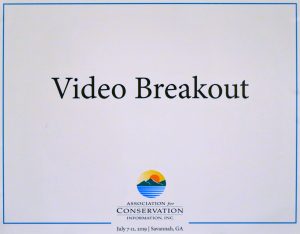 The Better Relationships Breakout at the ACI Conference in Savannah provided an opportunity for conference attendees to share how their agencies use video in their outreach efforts. The discussions were informative for folks just getting started with video as well as for those who already use video but want to expand their efforts.

States showcased a variety of video-dissemination methods, including use on various social media platforms and sharing with the media as beta-roll to help convey a story. States also employ video to target specific audiences, such as videos in Spanish or American Sign Language. We discussed a myriad of options for video use, including livestreaming cameras, 360-degree video for an immersive experience, and drone footage.

As a first-time ACI attendee, I was impressed by the lively participation by those attending the breakout. I was even more impressed by the willingness of others to share ideas and advice. I left the session, and the conference, with newly formed connections to knowledgeable, passionate conservationists and reinvigorated with new ideas to employ back at the office.

Upon my return to North Carolina, our Communications, Marketing and Digital Engagement Section began pursuing 360-degree video by purchasing a GoPro fusion, gathering footage to post on our agency’s YouTube channel as a series of 360-degree videos. We are in the early stages of using 360-degree video, but I am eager to attend the next ACI Conference in Santa Fe to bring the results, both the good and the bad, to the table for advice and guidance.