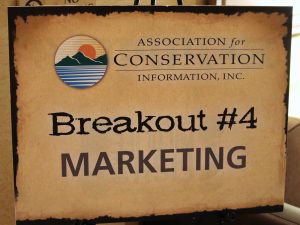 In the afternoon of the first day of ACI’s 2018 conference, attendees of the “Real Results with Marketing Outreach” breakout session heard from program administrators from around the nation on their efforts to reach new populations with important information on conservation issues. Particularly interesting was the portion presented by Sawyer Briel, Policy and Communications Coordinator for Wisconsin’s Department of Natural Resources, during which he discussed “Wild Wisconsin,” a web series and podcast focusing on hunting and wildlife related topics.

Describing his own agency as “not your grandpa’s DNR,” Briel used analytics and viewer demographics of his agency’s outdoors television program to show the benefits of transitioning that program into an online-only format. In making the switch, he was able to increase engagement and public outreach to younger, underserved hunting populations. Viewers are now able to watch or listen to episodes at their leisure, whether that be while sitting in one’s living room, in the woods, or in the car during commutes, on topics of their choosing.

Additionally, Briel noted that this change had resulted in a significant reduction in costs associated with the program, in large part due to the lower production costs associated with online video programming and new, professional partnerships the agency formed with private organizations based in the state, including Vortex Optics, Legendary Whitetails and the Mayville Engineering Company.

Wild Wisconsin was in its second season during the 2018 conference, and Briel said he is looking forward to building on the previous year’s successes to further improve communications with his state’s hunters.